Weeding Through the Hype The relatively rapid move to legalise medical marijuana in Thailand has struck a high note across the globe, paving a path for profit potential through fully legalised cultivation and export of the much-touted cash crop.

On Christmas of 2018, the National Legislative Assembly passed a law to approve the production, import, export and possession of cannabis and kratom, as well as regulations.

Consumers can carry specified amounts necessary for treatment of illnesses if they have prescriptions or certificates from professionals in the fields of medicine, dentistry or indigenous medicine.

Licences for the production, import, export, sale and possession of cannabis and kratom are to be issued by government organisations related to medical and agricultural research and narcotics suppression.

Euphoria surrounding the legalisation of medical marijuana has yet to dissipate, with the Bhumjaithai Party pledging to fully legalise marijuana cultivation as a new cash crop and thronging the streets with evergreen cannabis leaf posters during the election campaign. The industrial value of marijuana was $10.4 billion in the US last year, according to Fortune magazine. Thailand stands to reap vast economic benefits from the weed trade.

But well-crafted regulations need to be in place to supervise this billion-dollar industry in a country famous for entrenched corruption and business monopolies, otherwise the much-publicised benefits will not trickle down to grassroots communities.

As the first country to legalise medical marijuana in Southeast Asia, Thailand could be the Asian hub of a legal trade that has already caught fire in North America and parts of Europe, but only if it acts fast to solidify its early advantage.

Although still in its infancy, Thailand's medical cannabis industry has the potential to be worth $1 billion, provided that the government adopts the Bhumjaithai Party's proposal to legalise recreational cannabis and allow unrestricted growing by farmers, said Jim Plamondon, vice-president for marketing at the Thai Cannabis Corporation advocacy group. Mr Plamondon said weed exports could reach as high as $10 billion a year if international law is changed to allow cross-border trading of cannabis products.

"The most important thing is to stop thinking of Thailand as an 'exporter of commodities' and to start thinking of an 'exporter of branded, value-added products' in which Thai firms own the product until it hits retailers all over the world," Mr Plamondon said. "Cannabis can be agriculture's pivot to Thailand 4.0."

Thailand already has a few cannabis brands like Thai Stick that could hypothetically be copyrighted and marketed around the world, he said.

The country's medical marijuana industry is in a de facto trial period, with production being controlled wholly by the Government Pharmaceutical Organization and traditional Thai medical practitioners.

Mr Plamondon hopes that Thailand's marijuana industry will grow to be equitable, sustainable and a boon to local communities, not just a profit-making venture for corporations.

"Thailand has the opportunity to own and build multinational companies that create a future that is more sustainably profitable for everyone in Thailand," he said. "Or it can enslave its farmers to foreign multinationals. It is a choice. So far, I have been impressed with the choices Thailand's government has been making."

Tom Kruesopon, also known as "Mr Weed", hopes to get a leg up on legalisation by creating a business, Golden Triangle Health, to export traditional Thai products to the US and Canada, where they can be infused with cannabis. These include cosmetics, balms, food, drinks and traditional medicines.

"The biggest moneymaker right now would be herbal medicine," he said. "It's already good by itself, even without infusing cannabis, but when you do you're essentially turbocharging the medicine."

Mr Tom, who advises Bhumjaithai on its marijuana policy, said regulations should be further relaxed, allowing the plant to be regulated on a par with alcohol and tobacco, with individuals needing a government certificate to grow the crop. One of Bhumjaithai's trademark policies is allowing Thai households to grow six pot plants each, considered a loose adaptation of California's personal use policy.

While Thailand's medical marijuana is still tightly controlled by the government, international firms are already looking at the country as a potential investment opportunity.

Mr Tom said he had a meeting with a large cannabis firm, Canada-based Canopy Grow, that is planning to wait 3-5 years before attempting to enter the Thai market.

"There is a lot of interest in Thailand to see how the medical part moves along," he said. "Major corporations are looking into it, but it's still too early to move in."

Despite a cloud of positive numbers being projected for cannabis farming, not everyone has high hopes for liberalised marijuana cultivation, with concerns surrounding regulations and perilous effects on consumers.

It is doubtful whether liberalisation of cannabis production can help generate sufficient income for farmers, said Wiwat Salyakamthorn, deputy agriculture and cooperatives minister, citing how past policies encouraging farmers to grow rubber and cassava eventually resulted in accumulated debt and policy mismanagement.


"It's still too early to say whether marijuana can be a cash crop for Thailand's economy, but it certainly has benefits for coping with cancer," Mr Wiwat said. "Medical marijuana is an important alternative for patients whose bodies cannot endure chemotherapy."

Daycha Siripatra, the founder and president of the Khao Kwan Foundation, who made headlines when authorities seized 205 pot plants and other cannabis-related products in Suphan Buri province last month, offers a cannabis oil that more than 5,000 patients have used for treatment, Mr Wiwat said. It is made up of 3% cannabis oil and 97% coconut oil.

Nipon Poapongsakorn, distinguished fellow at the Thailand Development Research Institute, said cannabis should not be promoted or labelled as an economic crop for recreational use, as it can be destructive to people's health.

Mr Nipon cited research by Harvard Medical School that cannabis affects physical and emotional aspects of humans and can cause irritability and depression during withdrawal. Addicts who graduated from cannabis use are found to have an urge for stronger drugs, he said.

"It is very dangerous to promote cannabis use because it carries a social cost, and it is not worth it," Mr Nipon said. "As for promoting marijuana as an agricultural crop, we have to admit all agricultural crop prices fluctuate. Even for medical use, the government must come up with an effective control system. We can't rest assured the government can control its use for recreational purposes."

Before the government promotes marijuana cultivation, there should be a study on the percentage of users who graduate to stronger drug use, Mr Nipon said.

If only 3-4% of marijuana users move to stronger drug use, legalised marijuana cultivation may be acceptable, he said, but if the proportion is 20-30%, cultivation should not be promoted.

While the idea of liberalised marijuana cultivation to enhance income in poorer communities is still being discussed, a well-conceived plan to control such a harvest is needed to ensure transparency and inclusive growth.

There must be some kind of limited boundaries and a closed system if the government is to promote marijuana cultivation to increase its value to benefit grassroots communities, said Somporn Isvilanonda, senior fellow at the Knowledge Network Institute of Thailand.

The supply chain must be controlled from upstream to downstream, Mr Somporn said. 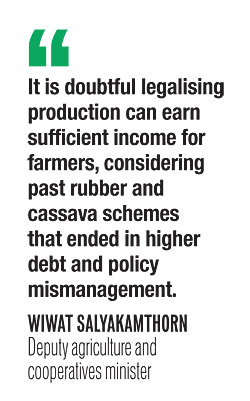 "The extract we need is cannabidiol (CBD), which is used for medicine, rather than tetrahydrocannabinol (THC), which people use to get high," he said. "We must study the marijuana crop clearly and the production process must be safe. We must take special care to prevent a monopoly and must clearly define areas for cultivation."

Enterprise communities involved with marijuana cultivation shall be promoted, but their operations must be registered, Mr Somporn said.

"We should not allow cannabis to be cultivated freely," he said. "Farming must be controlled by a zoning system. Even in countries such as Canada, there is zoning rather than free plantation, otherwise it will become a narcotic."

She said cannabis could replace many opioids used in pain management for chronic conditions like cancer, multiple sclerosis, fibromyalgia and diabetes. By replacing more harmful narcotics, cannabis could cut down on opioid addiction rates among patients who need long-term pain relief.

Cannabis products could also be used to alleviate anxiety and sleep anxiety, or even for anti-ageing treatments, Dr Aimon said.

"It is interesting Thailand was the first Asian country to legalise medical cannabis, but the regulations are still unclear," she said. "I'm a bit concerned that other countries could come in and get it done quicker."