Could CBD And Cannabis Eliminate The High-Cost And High-Stakes Of Current Psoriasis Medicines? Often triggered by stress, new studies are showing that psoriasis can be better managed by diet, oral health, and even cannabidiol.

The National Psoriasis Foundation states that upwards of 8 million people have the auto-immune skin disorder. Often accompanied by arthritis, psoriasis not only causes scaling of the skin, but complications to fingernails as well.

Affecting everyone from children to adults, psoriasis can lead to anxiety and depression, as individuals with the skin disorder are often afraid of being ridiculed. Usually treated with Humira and Enbrel, psoriasis comes with a shocking price tag and complications that are often difficult to ignore.

A 2014 study published in the journal Drugs in Context found that Humira had a price tag upwards of $39,000, while Enbrel’s annual cost was around $46,000. Stelara, the most expensive drug, was found to cost over $53,000.  As TNF blockers, while medications like Humira help against psoriasis, they can lower the body’s ability to fight infections and cause serious side effects.

Even more interesting, a September 2019 study in London found that, “A number of medications commonly prescribed by rheumatologists may interact with cannabidiol oil” (CBD oil). The most affected medicines appear to be corticosteroids (including hydrocortisone and prednisolone) since CBD, “is a potent inhibitor of CYP3A.” Put plainly, CBD may block the effects of the other medicine. 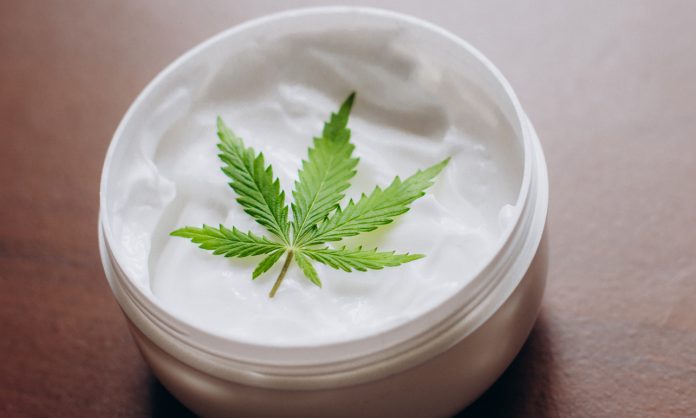 Often triggered by stress, new studies are showing that psoriasis can be better managed by diet, oral health, and even cannabidiol. The National Psoriasis Foundation shared information on a study from the Journal of Dermatological Science showcasing that, “CBD may offer therapeutic value for psoriasis by slowing the overgrowth of certain skin cells.”

A 2016 study published by the National Institute of Health found similar results, citing that cannabinoids may be a positive addition to treatment for psoriasis. Even better, a 2018 study did a sweeping review of prior research on cannabis’ role within dermatology and found, “cannabinoids have shown some initial promise as a therapy for a variety of skin diseases.” Their only concern was a lack of research in clinical trials, due to the Schedule 1 classification of the drug.

While CBD and cannabis offer pain relief and psoriasis is often accompanied by rheumatoid arthritis, each individual must discuss the addition of any new medicine (including CBD and cannabis) with their care team. With new clinical trials for cannabinoids and psoriasis recruiting even now, promising cures may be on the horizon.