Thailand is moving forward with its plan to allow residents to grow up to six cannabis plants and sell it to the government as a way to stock its legal medical cannabis market.

“We are in the process of changing laws to allow the medical use of marijuana freely,” Health Minister Anutin Charnvirakul said last week in Bangkok. “We have high confidence that marijuana will be among the major agricultural products for Thai households. We are speeding up the law changes. But there is a process to it.”

Thailand became the first country in Southeast Asia to legalize medical cannabis back in December 2018. Adult-use cannabis is still illegal though and carries harsh penalties, such as time in jail.

Anutin, who is also the Deputy Prime Minister, has been the driving force behind Thailand’s changing laws towards cannabis.

He campaigned in March for home cultivation as a way for citizens of the country to earn extra income.

However, there are some obstacles to Thais earning that kind of cash.

There is first the cost of the cannabis growing equipment necessary to grow, such as lights and nutrients, which not all Thais may be able to afford.

Even if Thais are able to get started growing cannabis, it can be a tricky plant to grow, and not all homegrown cannabis may meet the standards required for it to be used for medical use.

To help the average citizen grow cannabis and sell it, there is Maejo University in the northern Thai city, Chiang Mai.

“The university will be a centre where ordinary people can learn how to plant and grow good quality cannabis,” Anutin said. “Cannabis is not an issue of politics; it is a product that can benefit people’s health.”

The university has already planted 12,000 marijuana seeds in September in what it calls Southeast Asia’s largest industrial medical facility. The plants are planned to be used to manufacture one million bottles of cannabis oil by February 2020.

Anutin is banking that cannabis will be a significant and lucrative crop for Thailand, whose economy mostly depends on crops such as rice, sugarcane and rubber.

He predicts that cannabis could be even more successful than those crops and compete with international markets given the country’s low wages.

While other countries are also offering cheap labour for cannabis, such as Latin America and Africa, Anutin also wants Thailand to offer its own unique strains as a competitive advantage.

Maejo University already is reportedly creating its own unique strain called “Issara” (independence), which offers equal amounts of THC and CBD, according to the Asia Times. 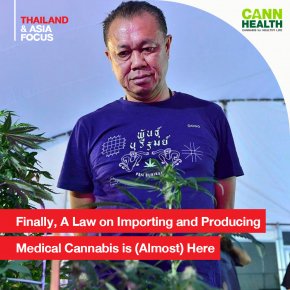 Finally, A Law on Importing and Producing Medical Cannabis is (Almost) Here